Mom shares daughter’s battle with cancer to help others

In Sue Matthews’ book, “Paint Your Hair Blue: A Celebration of Life with Hope for Tomorrow in the Face of Pediatric Cancer,” she tells the story, along with her sister Andrea Cohane, of her daughter Taylor’s diagnosis and fight.

Mom shares daughter’s battle with cancer to help others 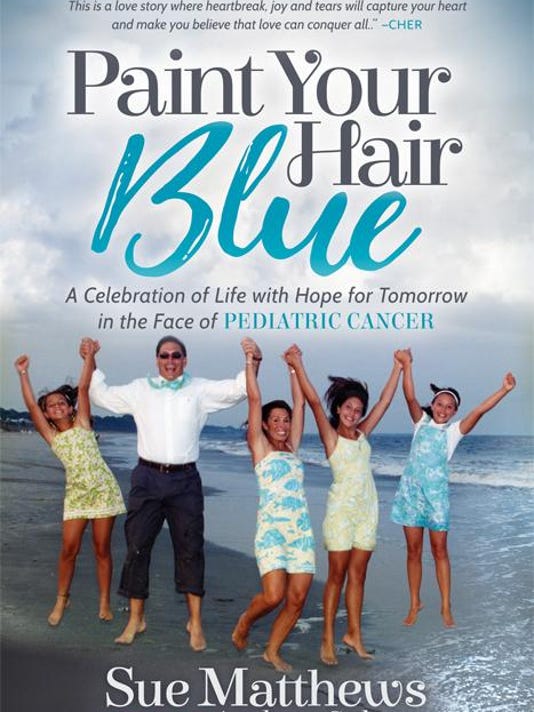 Sue Matthews never could have anticipated what life would hold for her family, but she is using her unimaginable loss to encourage other parents and give them hope as they advocate for their children.

In Matthews’ book, “Paint Your Hair Blue: A Celebration of Life with Hope for Tomorrow in the Face of Pediatric Cancer,” she tells the story, along with her sister Andrea Cohane, of her daughter Taylor’s diagnosis and fight. She also gives parents an example for navigating the healthcare system.

“Taylor was 11 years old when she was diagnosed completely out of the blue,” Matthews said.

Taylor was out of breath at soccer practice and was diagnosed with exercise-induced asthma. Matthews pushed for an evaluation by a specialist. A chest x-ray began the family’s journey.

“She was given three months to live,” Matthews said.

But Matthews pulled out all the stops to ensure that every treatment option was explored. In the book, Matthews is vulnerable and open about her willingness to challenge doctors and hospitals and try new avenues when she felt it was for Taylor’s benefit.

But while Matthews wants to support and encourage parents to remain their child’s best advocate through illness, she also provides a roadmap for not losing sight of the joy her daughter found even while she was sick.

“Cancer and fun and cancer and love can coexist,” she said. “Taylor was a kid with cancer, not ever labeled as a cancer kid. Today is the only day you have. We don’t know what’s going to happen tomorrow.”

Throughout the book, Matthews openly recounts her daughter’s life, how cancer impacted everyone in the family, including Taylor’s sisters, and how they took on the role of medical advocates for Taylor. She said parents have to find a balance between finding what is best for their child’s treatment and remembering that there is life outside medication and tests.

“Advocate, but live life to the fullest,” she said. “She had scans every 3 months. I really didn’t worry about them for 2 ½. I was able to compartmentalize. It’s tough. The most god-awful thing has happened to you.”

Taylor far outlived what doctor’s expected. She had time to accomplish much and leave a legacy by starting a nonprofit organization that initially raised money by selling headbands. It continues as a foundation that raises awareness and funding for pediatric cancer research.

“Her journey was successful,” Matthews said. “She packed everything in. She was just hilarious. She was born that way and cancer wasn’t going to change it.”

Matthews said writing the book is part of continuing Taylor’s legacy. To date, the Taylor Matthews Foundation has raised $1.5 million and Matthews said there is evidence that the organization has saved live. A portion of the proceeds from the sale of the book support the foundation.

“I’m trying to live the life that she would want,” she said.