Tetralogy of Fallot (ToF) is a congenital heart defect involving four issues of the heart. 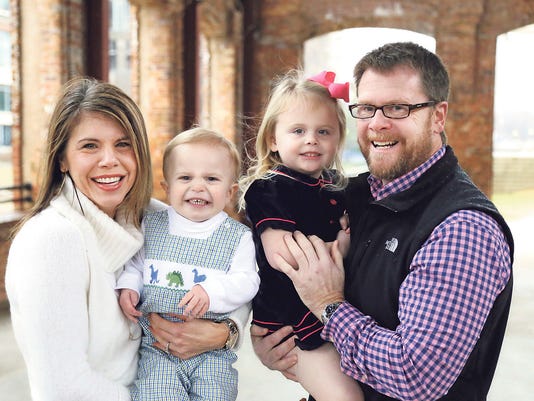 Hampton Niles gave his parents quite a scare.

Though he will celebrate his second birthday in March, an ultrasound at 12 weeks showed that he might have a bumpy road after birth.

Russ and Ashley Niles were already the parents of Anna Gates, now 3½, who is healthy. At the 20-week mark of their pregnancy with Hampton, they were told that their unborn son had tetralogy of Fallot (ToF), a congenital heart defect involving four issues of the heart: pulmonary stenosis, ventricular septal defect (VSD), an overriding aorta and right ventricular hypertrophy or thickening of the right ventricle. They were referred to a pediatric cardiologist and closely monitored throughout the remainder of the pregnancy.

“We were told he had garden variety ToF,” Niles said. “He would require surgery, but it would be more like the 6- to 8-month age.”

After Hampton’s birth, that diagnosis remained the same — for a while.

“They had him on pulse oximetry and other devices,” Niles said. “His (oxygen) saturation levels kept going down. The cardiologist got on the phone with MUSC. They are the only place (in South Carolina) that does that cardiac surgery for pediatrics. At that point they said we need to get him down there (to Charleston).”

The transfer took place when Hampton was just 8 days old.

“It was literally about 2½ hours before he was in surgery,” Niles said. “It was touch and go.”

Hampton is this year’s Little Heart Honoree at the American Heart Association’s Upstate Heart Ball Feb. 20 at the TD Convention Center. The Niles family is supporting the AHA out of gratitude for its efforts, along with those of the Emerson Rose Foundation, to require pulse oximetry monitoring of babies born in South Carolina. Screening with a pulse oximeter is a noninvasive way to measure blood oxygen levels.

“Obviously, being a cardiac baby, he was going to be monitored anyway,” Niles said.

But Niles believes that monitoring was essential to getting Hampton the care he needed and ultimately, saving his life. The family has made it their mission to spread the word and encourage support for the AHA’s research and programs.

“I just look at my son and think about what he has done already,” Niles said. “We want to help other people who have to go through something as horrendous as we did. The sheer terror of going through that — we want to do what we can to help other families not have to go through that. We averted a disaster, but hopefully with more research that type of issue wouldn’t have to happen.”

The 2016 Upstate Heart Ball is Feb. 20 at the TD Convention Center. For tickets and registration, visit this site. Learn more about the Emerson Rose Foundation here.