The $1.4 million project provides the region's students with a state-of-the-art facility for learning.

Families who have missed Starry Nights at Roper Mountain Science Center have reason to celebrate.

The center’s newly renovated T.C. Hooper Planetarium will reopen to the public this weekend after a year-long $1.4 million renovation project that includes new seats, carpet and 360-degree full immersion dome.

“We are very excited to show off our new planetarium,” said Michael Weeks, director of RMSC, during a media and donor reception Wednesday.

Weeks said the center serves approximately 500 students each day who travel from across the Upstate, Columbia, Georgia and North Carolina to participate in their hands-on learning science labs. Almost one year ago in late March, Roper Mountain Science Center announced via e-mail newsletter and its website that, due to the discovery of mold, the giant dome theater and planetarium had been temporarily closed until further notice. 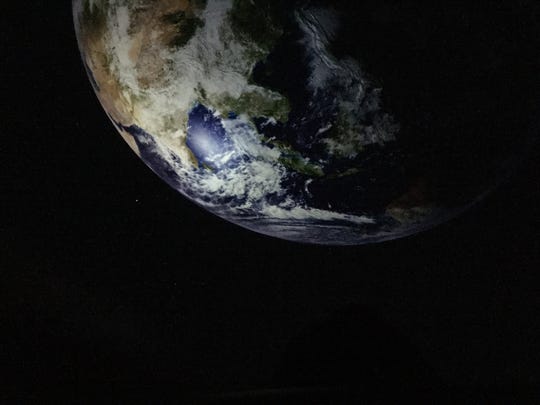 “Think back to 1984, and we didn’t know what STEM was,” he said. “Now everybody in the whole country is saying, ‘STEM – we’ve got to have it in our science program.’ We have this tremendous asset. Can you imagine trying to build this today?’”

Craig McCoy, CEO of Bon Secours St. Francis Health System, said the health system was honored to provide funds for the new state-of-the-art 4K projection system in the planetarium. One of the planetarium's new shows will allow students to go inside the human body and see how it works.

“We are particularly enthusiastic about the Zygote Human Body program as attendees will be exposed to the study of human life and as a result could potentially be inspired to consider the medical profession,” he said. “We hope students across the Upstate and the state of South Carolina will be inspired to learn and reach their full potential as a result of the educational offerings at Roper Mountain Science Center.”

Einstein’s telescope, RMSC’s 23-inch refractor telescope, is located next to the planetarium in the Charles E. Daniel Observatory. Both will be open during the Starry Nights program, which begins at 7 p.m. Friday nights.