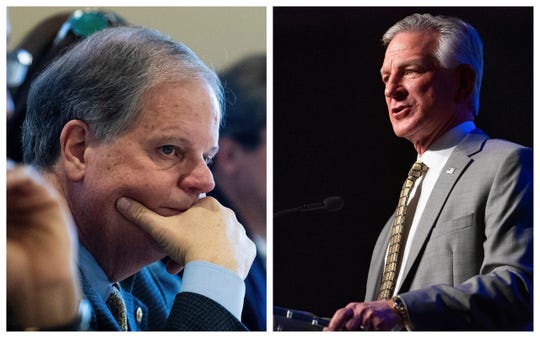 U.S. Sen. Doug Jones has leaned hard on the issue, defending the Affordable Care Act (ACA), which covers about 160,000 Alabamians, and encouraging Republican state leaders to embrace Medicaid expansion to expand coverage. Jones has also blasted a case scheduled to go before the U.S. Supreme Court on Nov. 10 — a week after the election — that has the potential to overturn the ACA.

Jones also expresses some support for Democratic presidential nominee Joe Biden’s proposal to offer a public option that people could buy into. He opposes plans for Medicare for All, which would set up a single-payer health care system similar to what other industrialized nations have.

Republican nominee Tommy Tuberville has called for the repeal of the ACA, which he calls a “failed experiment” on his campaign website. Tuberville calls for a “return to the free market where companies compete for your business, while ensuring that pre-existing conditions are not a deterrent to obtaining quality insurance and care.”

The former Auburn head football coach has not said what replacement plan he would support, or how he would cover pre-existing conditions. Tuberville’s campaign did not respond to emailed questions on the subject.

A proposed Republican replacement for the Affordable Care Act, which passed the House in 2017, would have required coverage for pre-existing conditions. But unlike the ACA, it would also have allowed insurers to charge significantly more for people who have them.

Health and health insurance in Alabama

Alabama has long struggled with high levels of chronic disease and major racial disparities in health outcomes, a legacy of slavery and segregation. The COVID-19 outbreak has brought this into sharp relief. Black Alabamians, who make up about 27% of the state population, accounted for 38% of COVID-19 deaths in Alabama through Oct. 16, according to the Alabama Department of Public Health.

Racial disparities have also been prevalent in the state’s infant mortality rates, among the highest in the nation. According to ADPH, about 5.1 white infants died per 1,000 live births in 2018. For Black infants, the number was 11 per 1,000.

Amid this, Alabama has seen at least seven rural hospitals close since 2010, and witnessed a long-term decline in the availability of obstetrical services. In 1980, according to ADPH, 45 of 54 rural counties had obstetric services. In 2019, the number was down to 16.

Jones called it “a crisis within a crisis,” and highlighted legislation he has introduced to reduce racial disparities; improve access to health insurance for pregnant women; extend health coverage to mothers and newborn children to up to a year after birth, and to improve coordination in health services.

“Medicaid and additional community health centers would be a huge help,” Jones wrote. “In addition, increased opportunities for telemedicine can make a big difference.”

The state generally ranks high in most chronic conditions. According to the United Health Foundation, over 36% of Alabama’s adult population is obese. Over 15% of the population suffers from diabetes. Alabama has a high rate of deaths from cardiovascular disease.

Jones generally advocates improved access to health insurance as a way to address these problems, most notably Medicaid expansion offered under the ACA. The Kaiser Family Foundation, which tracks health care issues and data, said about 441,000 Alabamians — 16% of the state’s non-elderly adult population — lacked health insurance in 2018. The state’s rate was lower compared to neighboring states like Georgia and Mississippi (both at 19%) but higher than the national average (13%).

Medicaid expansion would allow households making up to 138% of the federal poverty line — $17,609 a year for an individual; $29,974 for a household of three – to get coverage under Medicaid. The Kaiser Family Foundation estimated that 224,000 Alabamians would qualify for coverage if the expansion took place in 2019. Other estimates place it as high as 324,000.

Jones said Medicaid expansion was “the most effective way” to expand access to health care in the state.

“When people are uninsured, they often have to seek out routine medical care at emergency rooms,” he wrote. “This is a strain on our hospitals, and can lead to staggering medical debt for individuals — a debt from which some people may not ever escape. It benefits every Alabamian when more people have health insurance,” he wrote.

Republican state leaders have resisted expansion, citing the cost of the program. The federal government would pay 90% of the cost, but the state would have to provide a 10% match, estimated at about $168 million for the first year. (Advocates argue new jobs and better health outcomes created by expansion would offset these costs.) Jones has introduced legislation that would offer the state a 100% match, which was given to states in the first three years of the program.

Biden says if he is elected he would support a program to allow uninsured individuals to “purchase a public health insurance option like Medicare,” known as a public option. Jones wrote that he would support this “if we cannot achieve Medicaid expansion.” But Jones said he opposes “Medicare for All,” a measure backed by some Democrats that would establish single-payer insurance in the United States, similar to what other industrialized counties offer.

“I know that many people are happy with their employer-sponsored insurance and other private plans, and I do not want folks to lose the coverage they have now if they like it,” Jones wrote. “That being said, I understand the urgency and the frustration many feel when they look at our broken health care system, and see that it needs to change.”