When all the state parks are closed, along with DuPont State Forest and Pisgah National Forest, what’s an Upstate hiker to do? 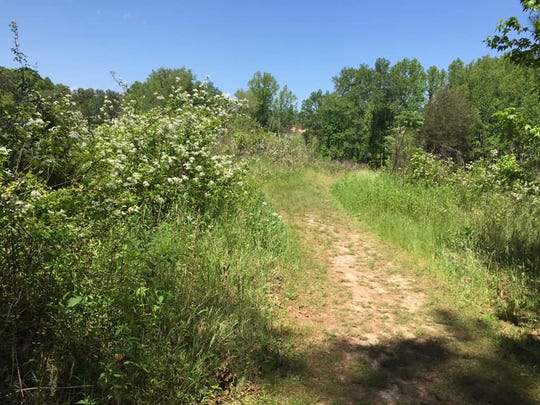 When all the state parks are closed, along with DuPont State Forest and Pisgah National Forest, what’s an Upstate hiker to do? The coronavirus lockdown was a tough time for my hiking friends, but they discovered they could still enjoy our state’s heritage preserves, including old favorites like Poinsett Bridge Heritage Preserve, but also spots new to me.

Word of mouth led me to Bunched Arrowhead Heritage Preserve outside Travelers Rest, which features a flat, 1.3-mile trail loop past a pond.

The bunched arrowhead is an endangered plant, which according to the South Carolina Wildlife Federation, now only grows naturally near Travelers Rest and Furman Universtiy. I found photos of the plant online, but the blooming season had passed. Without the white flowers which give the plant its name, I wouldn’t have recognized it from its grassy foliage alone. Although the bunched arrowhead wasn’t in bloom, the blackberry brambles were covered in white puffs of flowers.

A couple, visiting the area because their normal spot, Lake Conestee, was still closed, told us that they’d had a good day of birdwatching. They discovered the area had the largest population of Indigo Buntings they had ever seen. Sadly, the only one of these beautiful birds I saw was on the LCD display of their camera, but bird aficionados should bring their binoculars. 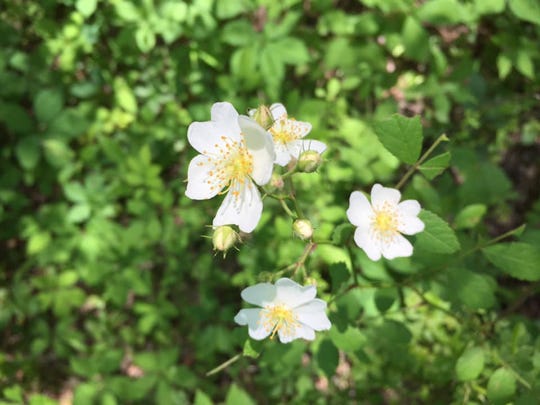 Driving through the boondocks, my GPS alerted me that I had arrived before I could see the nature preserve. A few seconds later, the green chain link fence surrounding the parking lot came into view. Pay attention: there is no sign at the entrance by the road. The only signage is at the trailhead.

Upon arrival, I was greeted by the lovely vista of Paris Mountain. There is a wooden platform to better appreciate the view.

A map is posted at the trailhead. I took a photo of the map with my phone, which is a best practice for hiking. The map did not have any landmarks, aside from the pond, so I didn’t find it helpful.

The pond itself was nice but not spectacular. The view is screened by trees. The trail itself, however, is cool because this portion runs along the top of an earthen levee. This path features boardwalks and bridges that my kids enjoy.

Near the end of the trail, I took a wrong fork and added a .6-mile loop to the trip.

Prior to my visit, another hiker online warned about splinter trails, however, it sounded like identifying the main trail wasn’t hard. For the most part, staying on track wasn’t too difficult because when faced with two options, I chose the wider path.

When I came to a fork where both paths were about the same width, though, I was uncertain. I made the wrong choice and soon realized my mistake: the path I’d chosen wasn’t mowed like the rest of the trail. It was a golf cart path.

The loop backtracked to a familiar spot on the trail, the meadow where I met the birdwatchers. I retraced my steps to the fork and chose the straighter path, not the one that cut left back to the trail system. 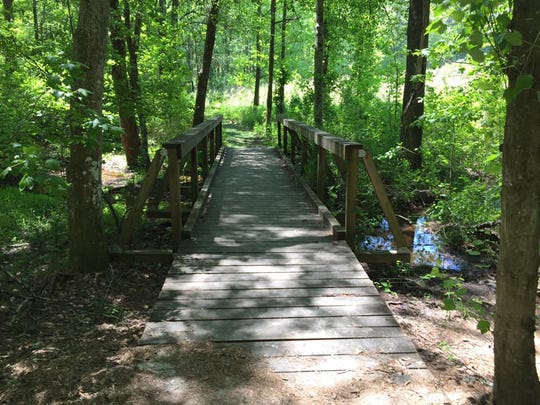 I could tell right away that I had made a better choice because the road came into view after only a few yards. Soon, we were back at the parking lot.

That misstep leads me to my only complaint about this lovely little spot: the trail isn’t blazed. I saw two signs, and only one was helpful. The other was meant for folks coming in the opposite direction, and it was only confusing. Another hiker had the same complaint while we were there.

Upon my return home, another hiker in my online group suggested that I download trail maps to my phone using an app. They will guide a hiker, just like Google maps guides a driver. That will be something I try out for our next adventure.