Doing good across the country 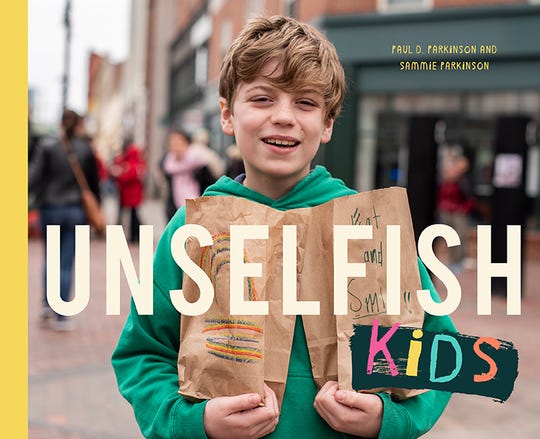 Paul and Sammie Parkinson are the father-daughter team behind “Unselfish Kids,” a new book that celebrates children who are not letting their age hold them back from changing the world.

The book features 40 elementary school-aged kids and the selfless and charitable acts they took on to make the world a better place. Many of the kids received national attention for their work.

Sammie Parkinson was a college student when she and her father started the book and she said it is a continuation of what her parents instilled in her and her five siblings.

“My parents were very service-oriented in their teaching,” she said.

Sammie said after-school conversations were focused less on grades and more on character, with her parents asking questions like, “How were you kind today?” and “How did you include someone?”

Paul Parkinson said adults have prejudices, but children are focused on helping others – a trait families and friends can encourage.

“Kids are just pure and innocent,” he said. “They are all about the service aspect.”

The Utah-based pair spent more than a year researching and working on the book.

“It was a great opportunity for us to work on a project together and solidify what we think is important as father and daughter,” Paul Parkinson said.

Throughout the process, both said they learned a great deal about what leads children to try to make an impact on the world around them.

“One thing that has really impressed me is the parental involvement necessary,” Paul Parkinson said. “Of course, we want our children to do well in school and develop their talent. I think it’s also important that we help them develop that kindness talent.”

Sammie said she noticed that parents, grandparents and even close friends often encouraged children by giving them an example of how to implement a solution when the children noticed a problem.

“The biggest commonality is a support system,” she said.

Excerpt from “Unselfish Kids” by Paul and Sammie Parkinson

Buckets of Cards for a Buddy

Landen Wilfong and Oliver Pleune are buddies, and first met when they were about 3 years old. Each has an older brother who played basketball, so they became good friends while watching from the sidelines of those games.

Oliver is fighting a rare disease called cystic fibrosis that damages his lungs and digestive system. He has to take medications every day and go through a lot of special breathing treatments to keep his lungs working properly. Every year, about 1,000 more people find out they have this disease. 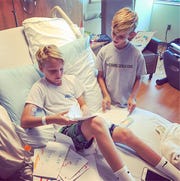 Oliver was recently in the hospital being treated for a lung infection, and Landen came each day to visit him. Landen didn’t like his buddy having to stay in the hospital and wanted to do something to cheer him up. So, he decided to ask his school classmates to make “Get Well” cards. When the cards were delivered to Oliver, Oliver was so excited that Landen decided to encourage his entire school to make even more cards! Each day Oliver was in the hospital, Landen brought him buckets full of cards, but what he was really delivering was happiness and hope.

It has always been hard for Landen to see his friend struggle with this disease, so when Landen was invited to participate in a charity event called “Fashion Breathes Life,” he was excited and jumped right in. This event raises money for the Cystic Fibrosis Foundation who is helping find a cure to heal people like Oliver. Landon wants to help them achieve that goal. But to be part of the event, he had to raise $2,000. But instead, he set a goal of raising $10,000! And with the help of many generous people, he was able to raise over $42,000 for the Cystic Fibrosis Foundation!

Oliver’s mom, Jill, says, “Landen is always thinking of others. He shows so much compassion and kindness. He’s an example to all of us of what it means to be a true friend.” He will keep on helping his buddy and others who have cystic fibrosis.