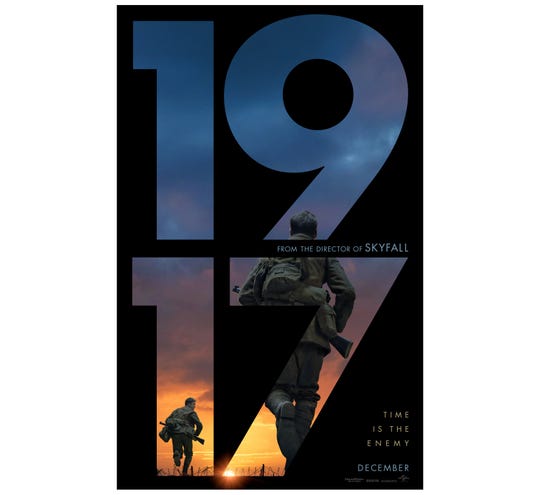 Here’s my advice for preparing to see “1917” when it opens locally on Jan. 10: settle into your seat, grab your armrests and breathe in deeply. Got it? Now, hold your breath for most of the next two hours.

Sam Mendes directed, co-wrote (with Krysty Wilson-Cairns) and co-produced this immersive snapshot of World War I, created in a one-shot format that gives us a day (or two) in the lives of those fighting to stay alive and make sure others do as well. The film lets us go along with two British soldiers, Schofield (George MacKay) and Blake (Dean-Charles Chapman) on a specific mission designed to save lives – if they can arrive in time. Their quest puts viewers in the action, and it does not flinch (nor can we) at the horrors of war.

The film style used here plays with time and has a few scenes early on that at first, seem gratuitously disgusting. Instead, those scenes were conditioning us for what was to come. Well into the movie, it was clear that we were being set up all along. Had we been in the theater for only two hours? Mendes time warps us in a way that I might only fully appreciate after a second viewing. It is an incredible piece of filmmaking.

Be on the lookout for some familiar faces that prove there really is no small role. And don’t be surprised when this one racks up all the awards.

Parents, save this movie for date night. “1917” is rated R with a run time of 110 minutes. View the trailer and a behind-the-scenes featurette at https://www.1917.movie.