How a boy and a dog rescued each other 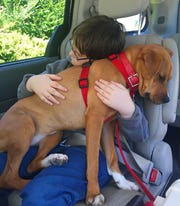 In September 2012, a dog – barely alive and profoundly emaciated – was rescued after suffering abuse at a level that is difficult to imagine. The graphic photos from that time tell the story of a pup so near death and it seems miraculous that she survived. But survive she did, and now she thrives in the home and heart of a boy who needed her as much as she needed him.

Linda Hickey is mom to Jonny, who in late 2012 was 8-years-old and finding his way with autism. Hickey was in her family room at their home in Georgia when she saw Xena’s photo on the evening news cast.

“I just saw that photo and it took my breath away,” she said.

“Every night I would say a little prayer for her,” Hickey said. “They thought she was a Labrador. The ears were flat down on her head. I had fallen in love with this Labrador. As time went on, they said, oh, she’s not a Lab after all. She’s a pit bull. I was fed the same information as so many were told, that pit bulls are bad dogs and attack dogs and they maul children. It’s what I believed.” 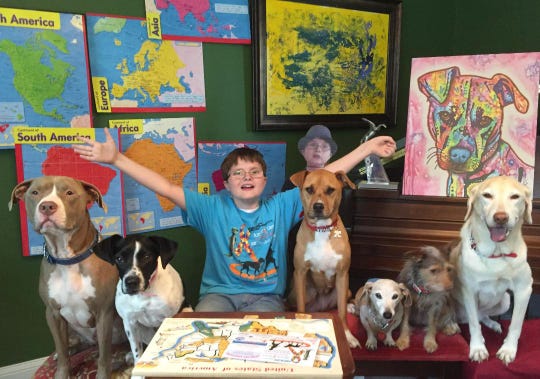 Jonny Hickey with his dog Xena the family's 5 other dogs (Photo: Provided)

But when Xena, who was not yet healthy enough for adoption, had a public meet-and-greet in November, Hickey had to go. The family already had two dogs at home, but Jonny really had little connection with them.

“Typically, we would never have brought Jonny to a situation like that because he would not have been able to manage it,” Hickey said.

Jonny’s older brother had a swim meet and was not able to babysit, so the family went together for a brief chance to see Xena.

The biggest surprise came that night as the family watched a news story about the event. Cameras had captured video of Xena running to Jonny.

“I never saw that while I was there,” Hickey said.

By mid-February of 2013, Xena came to the Hickey household for a trial visit.

“I put her in the van to pick up Jonny from school,” Hickey said. “When he came in, it was just magical. He who has space issues – she was licking him all over his face. She sat in his lap, which she still does today.”

“I couldn’t believe it,” Hickey said. “He was talking to her and saying words. He was counting her teeth. Our home was so silent prior. He would independently play. Now, there was giggling. There were words. There was chatter. It sounded like a home that had kids in it, which I didn’t have prior. The two were inseparable.”

Each day after school changed from a time of Hickey trying to get any information from Jonny about his day to Xena on his lap, getting details.

“He would have nouns and verbs,” she said. “He was a chatterbox with her. It was unbelievable the change she created in him. I don’t know if she unlocked something in him or if he just felt secure with her. There’s no judgment with her. These kids know they’re different. There are so many expectations placed upon them and they feel like failures. It’s so hard for them. He could just be free with her and the words would come out freely because of that.”

Now, through Jonny and Xena’s Spread the Words Foundation, a nonprofit that benefits animal rescue and the special needs community, Jonny and his family get to help others. The name of the organization comes from Jonny.

“He said, ‘We make a perfect team to spread the words to be kind to animals and kids like me, too,’” Hickey said.

The Hickey home is now home to six dogs, including Layla, who was horribly abused and found in a dumpster, and Parker, a rescued pit bull who has a head as big as his heart. But Xena will always have be special to Jonny.

“They’re like peanut butter and jelly,” Hickey said. “Because of the abuse she went through, she needed somebody. And Jonny, who wanted nobody, he had no choice. She broke through that barrier.”

Jonny and Xena’s Spread the Words Foundation will hold two upcoming fundraisers. A Special Needs Fashion Show is Sept. 29 at Johns Creek High School in Johns Creek, GA. The 5thAnnual Jonny and Xena Spread the Words 5K/Fun Run/Walk is Oct. 26 at Suwanee Town Center in Suwanee, GA. Register as a runner or a virtual runner/supporter at https://xenathewarriorpuppy.comand visit Xena the Warrior Puppy on Facebook.