Get ready to jump. A new family friendly, 35,000-square-foot trampoline park has opened near Westgate Mall in Spartanburg. 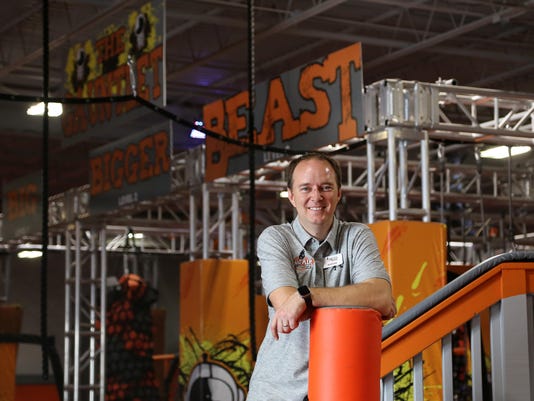 When Dustin Pelletier left his career in the construction industry, he and his family wanted a fun and exciting new opportunity.

“We decided we wanted to do a trampoline park because every time we go to trampoline parks, it’s always really busy, a lot of energy and a lot of families having a good time,” he said. “Plus, it’s a good workout. It’s not like going to a movie. It’s really active and fun for the whole family.”

“Most trampoline parks offer the same four or five features,” Pelletier said. “They offer a main court for kids to jump in. They have dodge ball courts, and they have foam ball pits. They also have basketball goals where you can jump and do slam dunks. Big Air sets itself off from the rest of the parks because they offer so much more than that.”

“You’re not attached to any kind of harnesses, so you get to fall and fall into a foam pit,” he said. “It’s really fun and very safe.”

The new park will also feature a battle beam, which is a balance beam 4 feet above a foam pit for jousting.

Pelletier said the park also features the first in the world laser maze over trampolines.

“It’s like what you see in the movies, where you’re trying to break into a bank vault or something, and there are laser beams you have to maneuver around so you don’t break the laser beam,” he said. “We have one of those in a dark room where you see the laser beam and have to dive and dodge and bend on top of trampolines.”

The Orbit is another feature that gives guests a chance to test their dodging skills as a big circle spins with arms that you have to jump on and around.

“Even our café serves food made fresh in our kitchen, and it’s not pizza that’s been brought in from somewhere and is sitting there for hours,” he said. “It’s a very family friendly, very mom- and dad- and kid-friendly place.”

He said parents shouldn’t worry about the trampoline park not being safe. Statistics show children suffer more injuries playing soccer and volleyball than at trampoline parks.

“We meet and exceed every safety standard for trampoline parks,” he said. “There’s padding all around. There are safety nets all around. We have trained, certified staff.”

He said the facility will offer birthday parties and have special family nights each week. Toddler time will be offered 10 a.m. – 1 p.m. Wednesdays and Thursdays for $8.

Highlands Center for Women, P.A. is now open with Dr. Matthew Smith and Dr. Amanda Ryan. The practice specializes in obstetrics and gynecology.

Highlands Center for Women was merged with another OB/GYN group last year as a part of Bon Secours Medical Group, but Smith and Ryan are reopening the practice independently. The practice is located at 369 Halton Road in the Halton Road Medical Plaza. Currently they will be delivering at St. Francis and performing surgeries at both Greenville Health System and St. Francis. More information can be found by visiting www.highlandscenterforwomenobgyn.com. To set up an appointment, call 864-234-1433.

Looking for things to do with kids in Greenville-Spartanburg? More stories relevant to families? Visit www.upstateparent.com.