Bambo Nature claims to be the world’s most eco-friendly diaper. 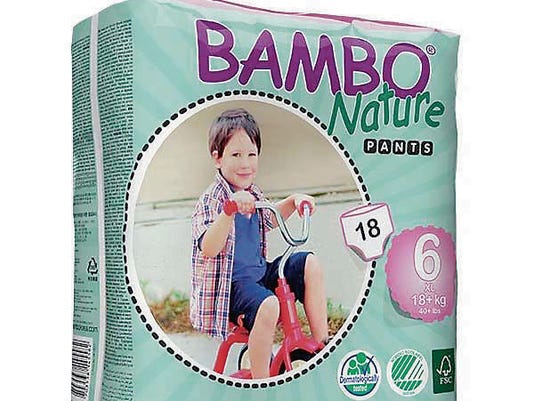 After six years of diapers, I’ve tried most of the disposable brands and cloth, so I was curious about a disposable claiming to be the world’s most eco-friendly diaper.

Danish Bambo Nature, available online, displays six certifications for health and the environment, including the Forestry Stewardship Council, guaranteeing more trees are planted than felled. In addition to claims of 100 percent sustainability and no harsh chemicals or allergens, they are the only conventional disposable diaper I’ve seen that’s completely compostable (wet only, not soiled).

Their cute, simple design is mostly white, so patterns don’t compete with my child’s clothing.

First was an overnight test — no leaks.

Our second test was my daughter’s preschool teachers; they know diapers. Some might question whether eco-diapers work as well as ordinary disposables, but the teachers had no idea.

My 2-year-old also tried training pants. Oddly, the training pants are numerically sized, unlike most brands labeled 2T/3T, and so forth. Normally, my daughter wears a 4, but for training pants, we used a 5. Both sizes fit.

The training pants offered a feature the preschool teachers and I had never seen: tape on the back to fold them neatly after use, like diapers. Unfortunately, I never mastered the tape because it’s awkward to have one piece of tape with half of the stickiness on the front and half on the reverse.

I hope Bambo Nature will tweak this potentially-cool, but over-complicated, feature.

Like most conventional disposables, Bambo Nature contains petroleum lotion, so I would rather compost the dirt for flowers than vegetables.

One con to Bambo Nature diapers is they are more expensive than other eco-diapers, but I believe the target market of eco-conscious buyers is accustomed to paying more for brands with such exceptional claims.