Many WSPA-TV viewers will recognize Malachi Rodgers as the station’s morning and noon meteorologist. 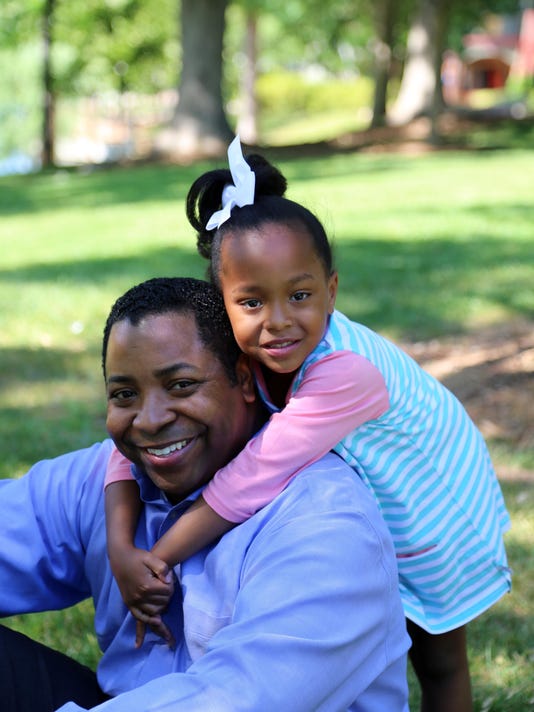 Many WSPA-TV viewers will recognize Malachi Rodgers as the station’s morning and noon meteorologist, but to 5-year-old Makayla, he’s simply known as Dad.

That’s not to say Makayla doesn’t understand her dad is on TV and has “a cool job,” Rodgers said.

“She has occasionally volunteered to do weather for me, and come in and help me do weather, but I told her, ‘Let’s give it a couple of years,” he said with a laugh.

Along with his wife LaVerne, who decided to be a stay-at-home mom after a full-time career as an educator, Rodgers said having his daughter while he was in his late 30s allows him more time to focus on his little girl now.

“In your mid 20s and early 30s, you have a lot more pulling at you, so it’s kind of cool we’re a little more settled and focused, so we can devote more time to her interests and the things she wants to do,” he said.

Although he works an unorthodox schedule — usually from 3 a.m. to noon — he still helps shuttle Makayla to activities, such as soccer, dance, camp and swim lessons. He’s also been known to participate in his daughter’s tea parties when she gets bored in the afternoon.

“Co-parenting is such an important part of raising a child,” he said. “The way my schedule is, I’m up well before dawn. It usually lines up that when I’m home, Makayla’s getting home from school. We spend time together outside in the afternoon, and the weekends are dominated by whatever her activities are. With my wife, we get a chance to bounce it back and forth between who takes the most time in the afternoon with her or who takes her places on the weekend. Honestly, I have no idea how anybody could do this as a single parent because it’s so involved.”

Rodgers credits his own father with setting a great and positive example for him to follow.

This Father’s Day, Rodgers will celebrate his own father before getting recognized as one himself.

“My parents live close, so as a son, we’ll be spending the day with my dad,” he said. “My part of the day will be a surprise.”

He said the role of father has evolved a lot for newer generations, with fathers and mothers sharing each other’s roles as needed. Most importantly, no two days are the same when you’re involved in your child’s life.

“One day we’re in the backyard chasing butterflies and the next day we’re looking at star charts or having light saber fights in the yard,” he said.

“Being a dad is a full-time job, but it’s a rewarding job. I wouldn’t give it up for anything.”

DADS: 'Stay at home' is a misnomer for Bob Boyle