Samantha Ponder, a reporter for ESPN, talks with Upstate Parent about work and being a mom. 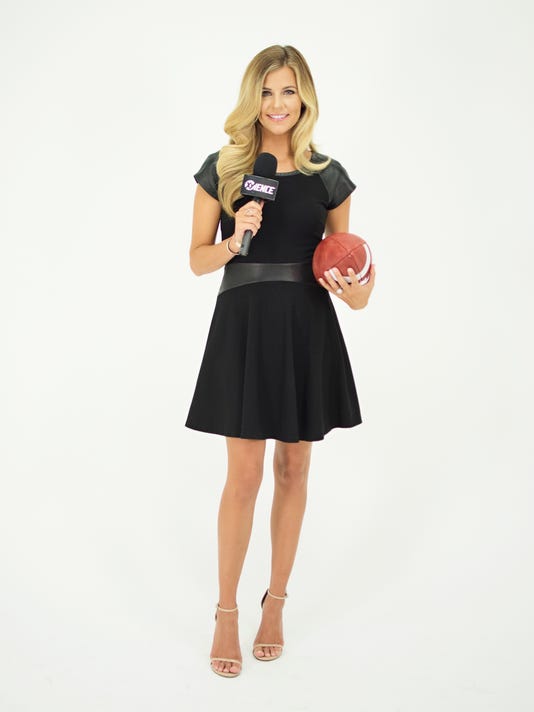 Samantha Ponder is a reporter for ESPN’s College GameDay. She is also a mom.(Photo: COURTESY PHOTO)

We all strive for balance as we juggle our professional lives with our personal lives.

Samantha Ponder, a reporter for ESPN’s “College GameDay,” has discovered that sometimes this critical balance means saying no to things you love in favor of things that you love more.

We chatted with Ponder in a Google Hangout sponsored by Xyience energy drink about marriage, motherhood and career.

Ponder, wife of Minnesota Viking quarterback Christian Ponder and mom to 17-month-old Scout, experienced a significant shift in priorities after becoming a mother. Daughter Scout was born just two months prior to the beginning of football season.

“For the first year of her life, I was on the road five days a week and Scout traveled with me,” Ponder said. “I decided I would cut back and not do as much. I am now only on two flights per week.”

“At the end of the day, I thought to myself, “What do I want to be doing?’” she said.  “And yes, I want to be a part of this industry and in sports broadcasting, but more than anything else I want to be a great mom — the best mom I can be. I am fortunate now to be able to spend a little extra time with her.”

Ponder is no stranger to tough choices. In an industry where it can be difficult to gain success, Ponder has said no to opportunities that did not reflect her personal convictions.

“When I was starting out, I got a lot of offers to do things that would have put me on the map quicker,” she said. “They were things that would have given me more notoriety and certainly more income, but also were not a good representation of who I was. I was broke, even living in my car for a while. So I had to learn to say no thank you with a smile on my face, even though I really needed the money.”

A passion for sports and determination to succeed has propelled Ponder further than she ever thought possible.

“When I was a kid, I thought that if I could just cover my local Phoenix Suns team, that would be as good as it gets. ‘GameDay’ is far beyond anything I could have imagined!”

Her dream of becoming a sportscaster began as a child.

“I love sports,” she said. “I realized in third grade though that I was not good enough to play professional sports. Being a sportscaster is the next best thing — to interact with athletes and get to tell their stories.”

While Ponder is telling others’ stories, the public is often telling her story, sometimes with a critical eye. Social media makes an incredibly public job even more so, she said.

“I wish I could go back and not search my name in social media,” she said. “When I started out social media was so new and I wanted to see what people said about me, but it was tough, especially when people said things about my physical appearance that I had not even thought of.”

But as in other things in life, Ponder has learned from social media.

“I found that I had to develop a smaller circle of people whose opinions — good and bad — really matter,” she said.

She also recognizes that there will always be others who will criticize.

“Don’t be afraid of someone telling you that something is a dumb idea,” she said. “When I was at Fox College Sports, I suggested using Twitter, but my boss at the time said it was just a fad. Now they use Twitter all the time. It wasn't a dumb idea. Don’t be afraid to pitch stuff.”

While it would seem Ponder has reached a pinnacle in her career, she is excited about the future.

“The most important two words my dad taught me when it comes to career are ‘then what?’” she said. “I started using this in every area of my life. ‘So you get your dream job, then what? So you find your dream husband, then what?’ You will find the greatest successes will not satisfy unless you enjoy the journey.”

Ponder spent a week in Clemson in January before following the football team to Arizona for coverage of the National Championship game. While leaving the city, she tweeted comments about her impression of it.

Really enjoyed my time at Clemson this week. Favorite small thing I noticed: every coach has a poster of their family over their office door