Review: What parents should know about 'The Incredibles 2'

"The Incredibles 2" is a box office hit, but how appropriate is it for families? We break it down for you.

Review: What parents should know about 'The Incredibles 2' 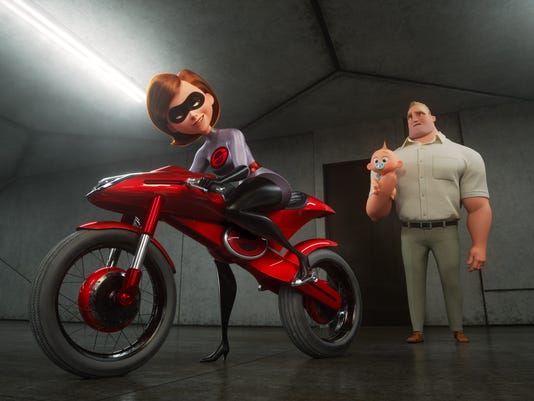 In “Incredibles 2,” Helen aka Elastigirl is called on to help bring Supers back. Her mission comes with a brand new Elasticycle, a state-of-the-art cycle that is designed just for her. Meanwhile, Bob navigates the day-to-day heroics of “normal” life at home. Featuring the voices of Holly Hunter and Craig T. Nelson, Disney-Pixar’s “Incredibles 2” busts into theaters on June 15, 2018.(Photo: Deseret News)

When Disney and Pixar’s “The Incredibles” released in 2004, it portrayed the Parr family as super-powered superheroes struggling with marital problems, mid-life crisis, and children coming to terms with being different. This weekend, The Incredibles returned to the big screen in a sequel that took 14 years to make, and considering it broke a number of box office records, it seems audiences thought it was worth the wait.

The sequel picks up seconds after the original movie ends, with Bob and Helen Parr (voiced by Craig T. Nelson and Holly Hunter) and their children Violet (Sarah Vowell), Dash (Huck Milner), and baby Jack-Jack squaring off against a new supervillain, the mole-like Underminer, alongside their superhero friend Lucius aka Frozone (Samuel L. Jackson). Things quickly disintegrate, and already unemployed after the events of the first film, Bob and Helen learn the program that has always helped support and hide superheroes has been canceled, leaving them homeless and jobless.

Help arrives in the form of two wealthy siblings who want to launch a PR campaign to make superheroes legal and accepted again. The catch is they only want Helen as Elastigirl for their marketing project because Bob as Mr. Incredible is too destructive. Reluctantly, Helen agrees, which means Bob has to stay at home and raise the kids — which is not as easy as he believes it will be. When a new supervillain named The Screenslaver uses technology to hypnotize people into doing bad deeds, Helen must find a way to stop him while Bob deals with his adolescent daughter’s problems and Jack-Jack’s emerging superpowers.

How appropriate is this movie for kids?

As fans of the first movie know, there is a lot of superhero violence as The Incredibles take on different supervillains. Vehicles crash, or almost crash, into buildings, Characters use their superpowers to fight each other. A train full of people almost derails. It’s all par for the course. Jack-Jack’s emerging superpowers are also violent at times, especially when he takes on a raccoon, which he wrestles, punches, shoots lasers at, attempts to set on fire, and tries to destroy — all done for laughs. There isn’t much profanity, but characters do say “d—n,” “h---,” “crap” and that something “sucked.”

Theaters have also posted signs at the studio’s urging to warn audiences that some scenes contain flashing lights that could trigger symptoms in people with seizures and vision problems.

Overall, “The Incredibles 2” is a fun, family-friendly superhero adventure, but it has some positive messages at its core. The most obvious is that parenting is the most heroic act any person can undertake. As Bob says, “I’ve got to succeed so she can succeed so we can succeed.”

Rated PG for action sequences and some brief mild language, “The Incredibles 2” is now playing in theaters nationwide.

More: 5 free things to do with kids this summer