'Jumanji: Welcome to the Jungle' — What parents should know

"Jumanji: Welcome to the Jungle" is now in theaters, but how family friendly is it? We break down the profanity, sex, and violence.

'Jumanji: Welcome to the Jungle' — What parents should know 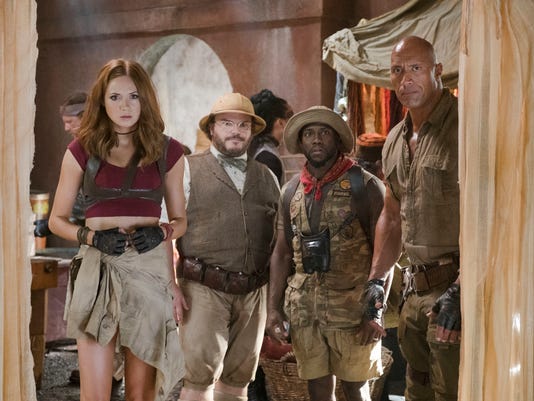 I caught a free preview screening of “Jumanji: Welcome to the Jungle” earlier this week, and I have to admit. I was surprised how much I liked it.

First off, I should point out that I am not a big fan of the original “Jumanji” starring Robin Williams, and it’s been so long since I’ve seen it, I can’t fairly compare the original with this sequel except to say the basic premise is the same. When someone plays the game Jumanji, they become part of the game and players have to work together to win and return to their real lives.  In “Welcome to the Jungle,” the story has updated the board game to a video game and introduces entirely new characters.

This story begins when high school nerd Spencer (Alex Wolff), quarterback Fridge (Ser’Darius Blain), popular girl Bethany (Madison Iseman) and loner Martha (Morgan Turner) find themselves in detention together, where they’re tasked with cleaning up the school’s basement. Buried amongst the clutter, an old video game system with the game Jumanji is quickly discovered, and the bored foursome power it up for some amusement. Soon, they become sucked into the game, where they assume the form and identity of the characters they’ve selected. Spencer is the masculine adventurer Dr. Smolder Bravestone (Dwayne Johnson), Fridge becomes the miniscule zoologist Mouse Finbar (Kevin Hart), Bethany is the cartologist Dr. Shelley Oberon (Jack Black), and Martha is Ruby Roundhouse, Killer of Men (Karen Gillan).

While they look different and their avatars have various strengths and weaknesses, the teens retain their existing personalities inside the game. With only three lives each, the only way to escape the game is to return a jeweled eye to a hidden jaguar statue working together, which is easier said than done considering teamwork is something they don’t seem to do well.

“Jumanji: Welcome to the Jungle” ends up being a hilarious and fun movie to watch, thanks to a smart script and some excellent casting. Black is a standout, playing a teenage girl trapped inside a middle-aged man’s body, but everyone is surprisingly good here. They also have incredible comedic chemistry together. Even Nick Jonas, who plays a 90’s teenager trapped inside an ace pilot’s body, adds something positive to the cast.

How suitable is it for families?

“Jumanji: Welcome to the Jungle” is rated PG-13 for adventure action, suggestive content and some language. There is no extreme violence, and it’s all done for comedic effect. There is some profanity sprinkled throughout, and some characters drink alcohol and get drunk. The suggestive content pertains mainly to the scantily clad costumes some characters wear, a little bit of flirting, and some awkward kissing.

There is some frightening imagery in the form of the villain, who controls the beasts of the jungle to do his evil deeds. Bugs crawl in and out of his ears, and jaguars and hippos chase and attack people.

There are some positive messages in the story, including teamwork, overcoming stereotypes and friendship.

I’d adhere to the rating and say it’s suitable for teens 13 and older.

Overall, “Jumanji: Welcome to the Jungle” ends up being a fun, hilarious comedy that families with older kids can enjoy together.

Just for parents, or bring the kids along?: Bring the kids, as long as they're mature or 13 or older