Disney's latest animated film, "Coco," is now in theaters. How kid-friendly is it? 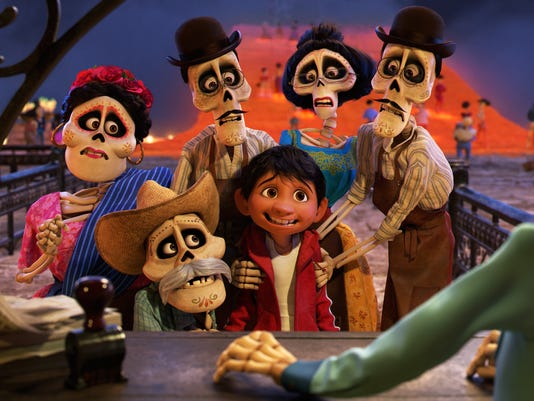 Miguel's extended (and deceased) family freaks out when the boy shows up in the Land of the Dead.(Photo: Pixar)

Disney and Pixar's latest film to hit theaters, "Coco," took the Thanksgiving weekend box office by storm, and if you haven't seen it yet, you should grab the kids and head to the movie theater as soon as possible.

A 12 year old with a dream, Miguel Rivera (voiced by Anthony Gonzalez) passionately wants to be a musician, but there's an obstacle in his way. His entire family prides itself on shoemaking, and music has been forbidden for generations, ever since Miguel's great-great grandfather walked out on his wife and daughter — named Coco — to pursue a musical career. So, Miguel sneaks away whenever he can to teach himself how to play the guitar, studying videos of local singing legend Ernesto de la Cruz (voiced by Benjamin Bratt) and playing for a lovable street dog named Dante. Miguel sees the annual Dia de Muertos talent show as a chance to convince his family he was born to be a musician, but his grandmother finds out and smashes his guitar.

Miguel defiantly sneaks into the mausoleum of Ernesto de la Cruz and steals the star's guitar, which unleashes a curse and sends Miguel to the land of the dead, where he must earn his departed family's forgiveness and blessing in order to return home. Of course, Miguel isn't willing to give up on his dream easily and sets off on an adventure to find Ernesto, aided by Dante, who has followed him, and Héctor (Gael Garcia Bernal), a charming trickster who is in danger of being forgotten by the living, which means he might disappear forever if Miguel doesn't return to the living and display his photo during Dia de Muertos (Day of the Dead).

Steeped in Mexican culture and superstition, "Coco" marks Disney-Pixar's first all non-white film, but that shouldn't influence why you see it. With fun and relatable characters, it features a poignant and captivating story that entertains as much as it teaches the importance of family, remembering your ancestors, reconciliation and forgiveness.

Parents concerned that the Day of the Dead representation might be too scary for kids can rest assured the dead characters are portrayed in cartoonish skeleton form, which is probably even more kid-friendly than those in "The Nightmare Before Christmas." A larger-than-life jaguar-type spirit animal might scare sensitive kids when it roars at the camera and stalks some of the characters, but even it turns out to be a pussy cat in the end. A subplot involving murder will probably go over most kids' heads, but parents should be aware some plot points are dark.

There is some name-calling for laughs, but no profanity. Miguel's defiance of his parents might disturb some, but ultimately, he feels remorse and learns to compromise. Family is a key theme of the movie, which is as enchanting as it is endearing. It's also colorful and vibrant, beautifully animated, and you don't have to be of Mexican heritage to enjoy this movie — but I suspect you'll love it even more if you are.

"Coco" is rated PG for thematic elements. It is now playing in theaters nationwide.

More: Review: 'The Lego Ninjago Movie' — What parents should know