Review: 'Thank You For Your Service' will resonate with military families

Review: 'Thank You For Your Service' will resonate with military families 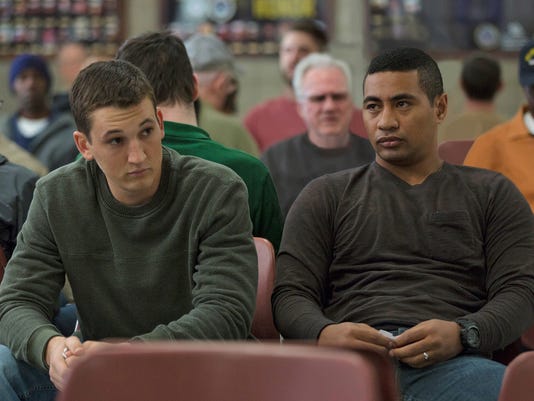 Miles Teller (left) and Beulah Koale star in "Thank You for Your Service."(Photo: Francois Duhamel/DreamWorks Pictures)

The new movie "Thank You For Your Service" is one of those movies that isn't fun to watch, but it's a powerful and captivating film nonetheless. It's not your typical war movie, but rather a movie that reveals the dark aftertaste of what war does to soldiers and how it affects them long after their tours of duty.

Adapted from a 2013 nonfiction book by David Finkel, "Thank You For Your Service" follows a group of soldiers returning from wartime in Iraq, namely Adam Schumann (played by Miles Teller), a young father happy to return to his loving wife, Saskia (Haley Bennett), and two young kids; Tausolo Aieti (Beulah Koale), also known as Solo, a soldier of American Samoan descent suffering from a brain injury; and Will Waller (Joe Cole), who discovers his fiancé has left him without prior notice. To begin with, Adam seems the most unaffected of the three, but like layers peeled away one by one, his experiences in Iraq begin to haunt him, too. This causes tension in his marriage and leads him to seek help from the Department of Veterans Affairs. Each of the three main veterans portrayed are suffering from post traumatic stress disorder (PTSD), and it affects everything from their relationships with others to their ability to function in society. But getting the help they need isn't as easy as it should be.

Screenwriter and director Jason Hall and the cast all do an outstanding job illustrating the plight of returning war veterans without being condescending, stereotypical or patronizing. Sure, it's a bit melodramatic at times, but even that melodrama feels honest at its core. Veterans and military families will likely find "Thank You For Your Service" an authentic representation of their experiences. As the daughter of a U.S. veteran, parts of it certainly resonated with me. My biggest complaint with this movie was the miscasting of Amy Schumer as a war widow. She simply didn't seem to fit the role, and every time she appeared on screen, I saw Amy Schumer, not the character she was portraying. Fortunately, she plays a minor character, so her casting doesn't pull you too much out of the story.

Rated R for strong violent content, language throughout, some sexuality, drug material and brief nudity, this isn't a movie for the entire family, but a movie adults should see, if for no other reason than to be informed. Be prepared for lots of profanity and some graphic images though.

Put your politics aside and go see this movie with an open mind. You might be surprised by it.

"Thank You For Your Service" opens Oct. 27 in theaters nationwide, but there will be a preview screening of "Thank you for Your Service" at 7 p.m. Thursday, Oct. 26, for U.S. Veterans and active-duty service members at AMC Theaters across the country. The first 25 service members with a valid, government-issued ID who request a ticket at each theater will be given one free admission to the movie.

Locally, the screening will be held at AMC Classic Spartanburg 7, located at 1640 John B. White Sr. Blvd. in Spartanburg.

More: Miles Teller has PTSD in exclusive 'Thank You for Your Service' trailer

More: Review: 'The Lego Ninjago Movie' — What parents should know