"Captain Underpants: The First Epic Movie" is now in theaters. We break down how family friendly it is. 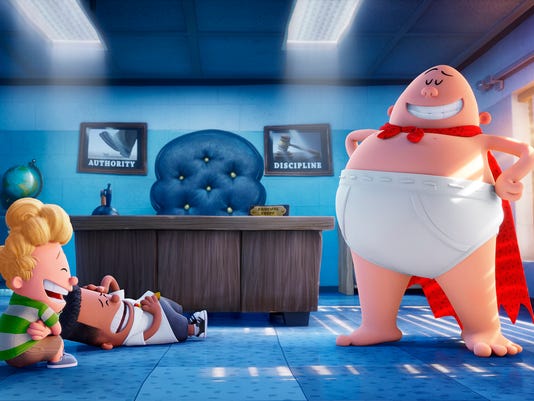 In case you don’t know, Captain Underpants is a chubby bald superhero who flies around in his “tighty-whities” and red cape. With a cheerful shout of “tra la laaa,” he’s faster than a speeding waistband, more powerful than boxer shorts, and able to leap tall buildings without getting a wedgy.  He has the power to overcome Spray Starch, but can he save the world from a villain named Professor Poopypants and gigantic talking toilets? Actually, Captain Underpants is the alter-ego of a cranky, tyrannical elementary school principal who is hypnotized with a decoder ring.

If any of this sounds confusing, you could ask a child in elementary school to explain it. Most likely, they have read the Captain Underpants series of books, written by Dav Pilkey, which are very popular with grades K to 5th grade. Or you can buy a ticket to “Captain Underpants: The First Epic Movie,” which opens this weekend.

The Captain Underpants children’s books have been translated into 20 languages and sold 80 million books worldwide. Kids all over the world are delighted by the goofy, comic book illustrations, clever stories, and funny characters. Parents love the fact that the books have inspired their children to read more. The film is based on the first four books in Pilkey’s bestselling series.

Some question whether Captain Underpants is appropriate for children.  Some contend it’s creepy to have a grown man running around in his underwear.  When my children attended elementary school, the Captain Underpants books were blacklisted and not available in the school library. Why? Because the books feature “inappropriate potty humor” with words like barf, butt, fart, pee-pee, poop, etc.

One thing about “Captain Underpants” the movie:  There are no jokes with sexual overtones or double meanings, nor is there a philosophical message.  The stories are ridiculously nonsensical and too absurd to be taken seriously. Any violence in the stories is slapstick and cartoonish, complete with bad puns and sections of "flip-the-page" animation. Apparently, the theme of Captain Underpants is friendship, and how having friends (and being creative) enables you to overcome life’s toughest challenges.

As you may have guessed, my kids and I were fans of Captain Underpants during elementary school. These stories caused my children to laugh and squeal with delight. They wanted to read them over and over again.  It also sparked my children’s imagination, as they invented their own superheroes and villains, and started drawing and writing stories.

I attended an advanced screening of the movie with my husband and 15-year-old son.  The movie brought back fond memories of reading the Captain Underpants books. It was fun seeing the story come to life on the big screen. The animation is colorful and creative, as it utilizes several different visual styles and formats, including live-action sock puppets and “Flip-O-Rama.”  We also enjoyed the music from the film, especially the theme song performed by “Weird Al” Yankovic and Adam Lambert’s high energy version of Aretha Franklin's popular hit, "Think." The soundtrack also includes original songs by Andy Grammer and Coldwar Kids, plus songs performed by cast members Kevin Hart, Thomas Middleditch and Ed Helms.

The story focuses on the adventures of George Beard (voiced by Kevin Hart) and Harold Hutchins (Thomas Middleditch), who are next-door neighbors and classmates, in the fourth grade, at Jerome Horowitz Elementary School. The boys are responsible for one prank after another, which puts them at odds with the principal Benjamin Krupp (voiced by Ed Helms.)

Principal Krupp is an angry and authoritative. He cancels the school’s art and music program, so that he can use the funds on himself. He installs a magnetic automatic door closer at his office. This bizarre door enables him to keep a tight rein on the students.

To escape the drudgery of school, George and Harold hang out in their tree house and make comic books.  Harold draws the pictures and George writes the words.  They create their own comic-books featuring a wacky superhero, Captain Underpants.

One day, Principal Krupp threatens to break up George and Harold, and put them into separate classes. That’s when they accidentally hypnotize him using a decoder ring from a cereal box. They turn him into Captain Underpants (also voiced by Ed Helms).  At first, the boys think it’s amazing and hilarious, but it’s all downhill from there. The boys are constantly doing damage control to prevent Captain Underpants from getting hurt or getting themselves into more trouble.  Harold and George discover that they can turn Captain Underpants back into Principal Krupp by splashing him with water or snapping their fingers.

As the boys get to know Principal Krupp / Captain Underpants, they realize that he is not a monster after all. He is a lonely and frustrated old man. They boys are hopeful when the school’s lunch lady, Edith (voiced by Kristen Schaal) shows romantic interest in him.

Meanwhile, Jerome Horowitz Elementary hires a new math teacher. He is an odd, German accented scientist named Professor Pippy Pee-Pee Poopypants, or as he likes to call himself Professor P (voiced by Nick Kroll). It turns out that Professor P wants to get rid of all laughter in school because people are constantly making fun of his name.   Comic complications abound as Professor P tries to take over the town with a giant robot toilet. Captain Underpants try to stop the villain and save the day.

Overall, this is a movie that will make you smile, as it captures the playful spirit of childhood, especially the creativity that comes from having a wild imagination.