Review: ‘TMNT 2’ – What parents should know

“Teenage Mutant Ninja Turtles: Out of the Shadows” is now in movie theaters. Read our review to see our ratings on profanity, sex and violence.

Review: ‘TMNT 2’ – What parents should know 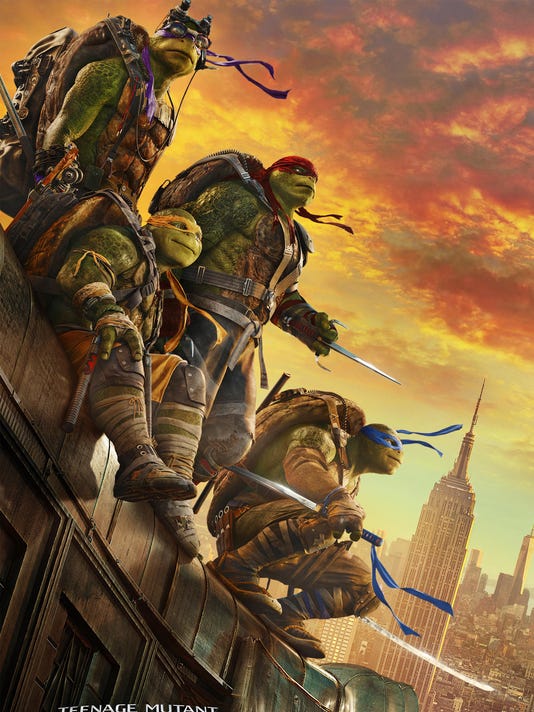 "Teenage Mutant Ninja Turtles: Out of the Shadows" is now playing in theaters.(Photo: Paramount Pictures)

“Teenage Mutant Ninja Turtles: Out of the Shadows” is yet another franchise sequel hitting movie screens this summer, but this time around, the sequel doesn’t take itself as seriously as 2014’s “TMNT” did.

“TMNT 2” is far more cartoonish and silly than its predecessor, and nostalgic parents will either love it or hate it. Based on how silly it is, I’m guessing kids would probably love it. Too bad it is rated PG-13.

“TMNT 2” picks up at some point after the events of the 2014 movie. When April O’Neill (Megan Fox) discovers a plan by a mad scientist (Tyler Perry) to break the Turtles’ arch nemesis, Shredder, out of prison, the Turtles — Leonardo, Raphael, Donatello and Michelangelo — spring into action to try to stop it. What follows is a ridiculous plot involving mutation goo, teleportation devices and an intergalactic villain named Commander Krang (voiced by Brad Garrett) who wants to destroy Earth, or something. As one character points out, you can either question what’s happening or simply go with the flow.

Parents who feel nostalgic for the 1990s Saturday morning cartoon or movies on which “TMNT” is based will appreciate the lengths the filmmakers go to bring memorable characters such as Bebop, Rocksteady and Commander Krang to life through CGI and motion capture technology while also introducing the human vigilante Casey Jones (Stephen Amell) into the cast. What parents might not appreciate is the profanity and violence included in the story.

As far as profanity, there’s more than I would expect from a movie certain to lure in families. I don’t remember hearing the f-bomb, so one could argue the profanity is mild. This movie also contains a lot of action and comic-book-style violence, including a plane crash scene that might be too intense for sensitive and very young viewers.

Many of the good guys —  I’ll call them Team TMNT — also do many questionable things that might set bad examples for impressionable kids. For example, I don’t think anyone in this movie ever put on a seatbelt before or during a car chase, or ever after getting into a car. Members of Team TMNT also break into a police station, steal things and call each other names. There are no sex scenes to cause concern, but a scene near the beginning of the movie shows April clad in a scandalous schoolgirl outfit for no reason that makes any sense, other than as an excuse to exploit Fox’s good looks with slow-motion and wind effects.

Those things aside, “TMNT 2” is still a lot more fun and cartoonish than its predecessor, although there’s still plenty of corny dialogue and lackluster acting to contend with as a hangover.

Like I said, kids will probably love it — that is, if their parents decide to overlook its less-than-kid-friendly qualities to let them see it.

“TMNT 2” is rated PG-13 for sci-fi action violence. It is now playing in theaters nationwide.